This section walks through a common deep learning task - training a Neural Network. WekaDeeplearning4j allows you to do this in one of two ways, both of which will be explained in this section: - Design your own architecture, specifying a custom layer setup - Use a well-known pre-defined architecture from the Model Zoo. Most models from the Model Zoo have the added benefit of a pre-trained option, which tends to improve generality and reduce the training required on your end to achieve good performance.

All datasets/models referenced in this tutorial can be found in the asset pack.

A very common dataset to test algorithms with is the Iris Dataset, a simple 4-attribute classification dataset. Although this is often used to demonstrate classical ML algorithms (e.g., boosting, decision trees), neural networks can also be applied to this style of dataset. 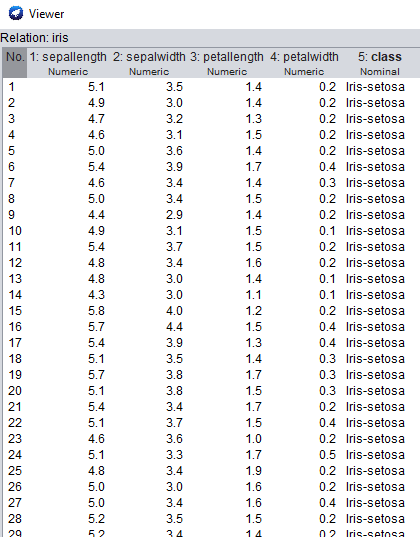 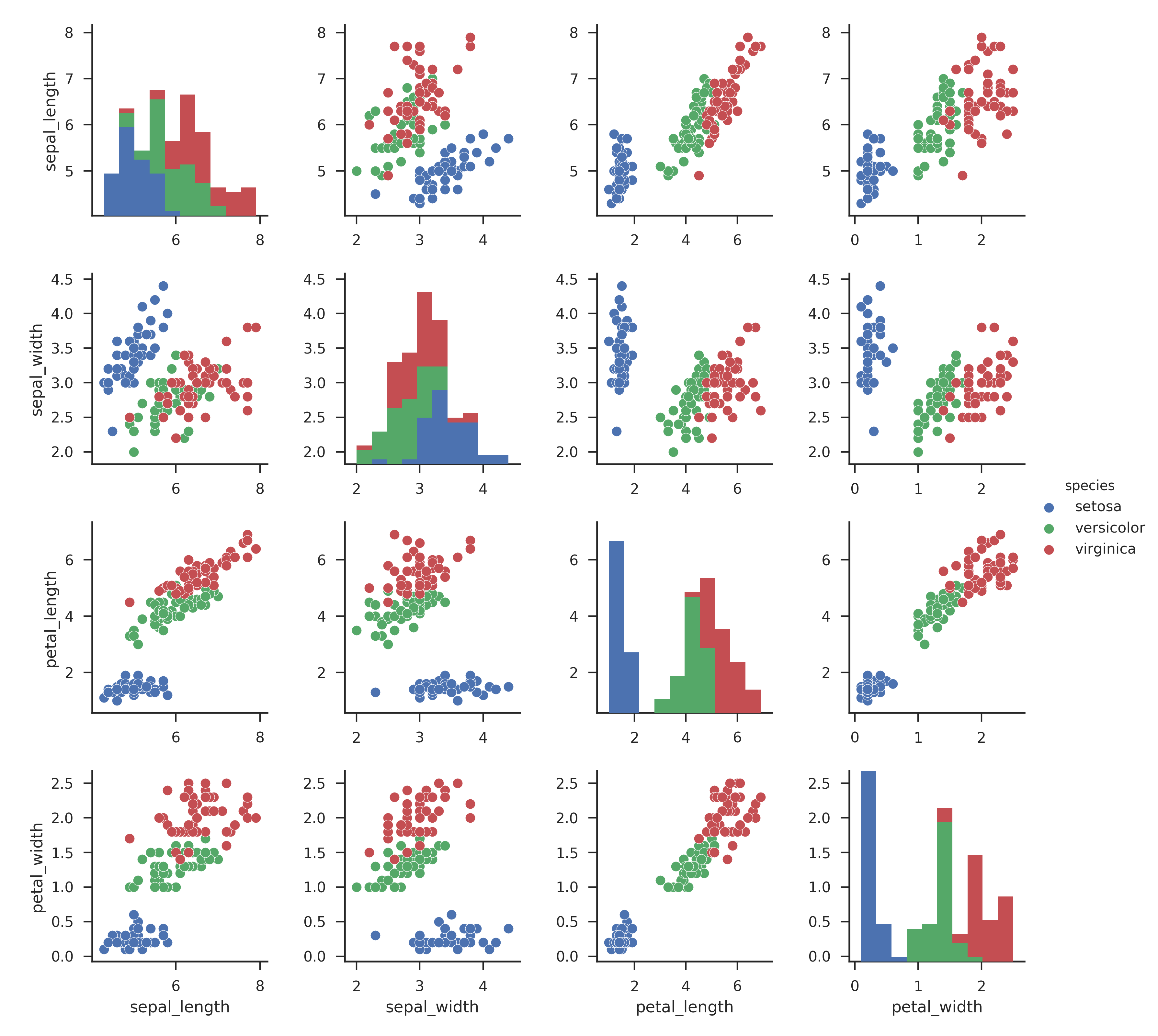 We're going to start with a simple network, progressively adding layers and noting the effect this has on performance & model size.

You'll note we've gone from 15 parameters, to 259 after only adding a single layer - neural networks can balloon in size very quickly as we add more layers! 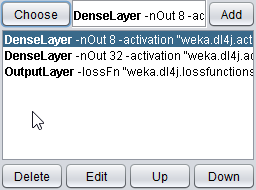 Train the model again and you should see a minor improvement in accuracy again, but not as much as before. If you don't see an improvement don't worry - the point at this part of the tutorial isn't to get accurate classification, but rather as a mild introduction to creating neural networks.

You may notice it training the model many times; by default WEKA performs 10-fold cross-validation on your data. This trains 10 different classifiers on subsets of the data, then averages their performance for the final summary result. This is fine for smaller datasets & models but as we continue this tutorial and train larger models it may take too long. For the sake of this tutorial, a faster method is to do a training/test split on the loaded dataset.

This next section will walkthrough training a neural network on an image-classification dataset, using a cutdown version of the MNIST dataset, which provides images of handwritten digits of 10 classes (0-9). We'll also introduce you to the WekaDeeplearning4j Model Zoo.

Important note: You'll notice that the format of this dataset is quite different to the previous one. Whereas iris.arff specified all attributes explicitly, this version of MNIST only specifies the filename and its associated class; this is a much more common use case (especially for image classification) so it's important to understand how to work with this in WekaDeeplearning4j.

Going to the Classify panel, if you click Start WEKA will throw an error (...Dl4jMlpClassifier: Cannot handle string attributes). This is because we're using a 'meta-style' dataset which only contains filenames. We need to configure the Dl4jMlpClassifier further to handle this new type of dataset and tell it what to do with these filenames. - In the Dl4jMlpClassifier settings, change the instance iterator from DefaultInstanceIterator to ImageInstanceIterator. - In the ImageInstanceIterator settings, set the directory of images to mnist-minimal/images/ , and the size of mini batch to 64 (you can reduce this if you run into out-of-memory issues). 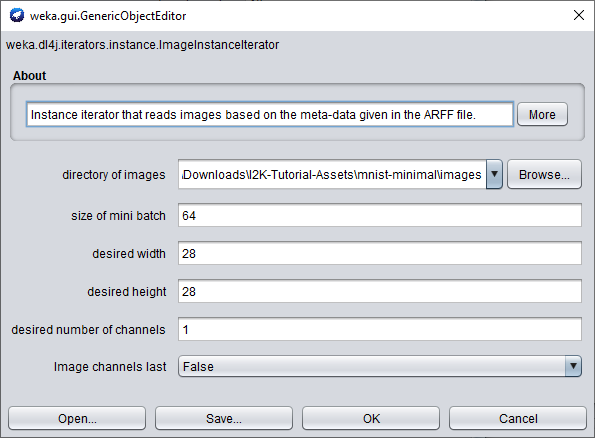 You should get an accuracy ~71% which is OK considering the model is only using the single output layer. We won't go any further into custom architectures at this point but instead look at using a model from the WekaDeeplearning4j Model Zoo.

WekaDeeplearning4j's Model Zoo contains a set of predefined state-of-the-art architectures which can be used on your dataset out-of-the-box. In addition, most of them include pre-trained weights so they often require less training to converge than training a model from scratch (with randomly-initialized weights).

As we're training on MNIST, it would make sense to use a pretrained model suited for this dataset. The LeNet architecture is one of the earliest CNN architectures proposed and was initially done so for use on the MNIST dataset. The Dl4jLeNet model included in WekaDeeplearning4j makes this (relatively) basic CNN architecture available, which we'll use for this section.

Note that the first time this is run the pretrained weights may need to be downloaded in which case actual runtime will be longer. These weights are cached locally so subsequent runs are faster.

You should get a marked improvement in accuracy over the previous (default layer-setup) model of ~88% with a single click - using pretrained models couldn't get much easier!

Fine-tuning a model on a Custom Dataset

The previous section is a useful walkthrough if you're training a model on a dataset which already has an .arff file correctly defined. For most use-cases 'in the wild', however, this is not the case; a more common case for image classification is a 'folder organised' dataset format - images are sorted into subfolders, with the class name being the subfolder name. This format is intuitive and easy to work with but cannot be loaded directly into WEKA without a few extra steps.

The dataset used in this tutorial is from the Plant Seedlings Classification competition on Kaggle, which is supplied in the tutorial asset folder. 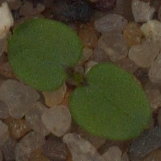 Loading a dataset in without an .arff file - Introduction to the ImageDirectoryLoader

This dataset is uses a common 'folder organised' format - images are sorted into subfolders, with the class name being the subfolder name. This format is intuitive and easy to work with but cannot be loaded directly into WEKA without further processing.

WekaDeeplearning4j comes with the ImageDirectoryLoader, a simple tool which creates an .arff file from a 'folder organised' dataset.

The ImageDirectoryLoader can be invoked by selecting a folder instead of a file from the Open file... menu, from the Preprocess panel. 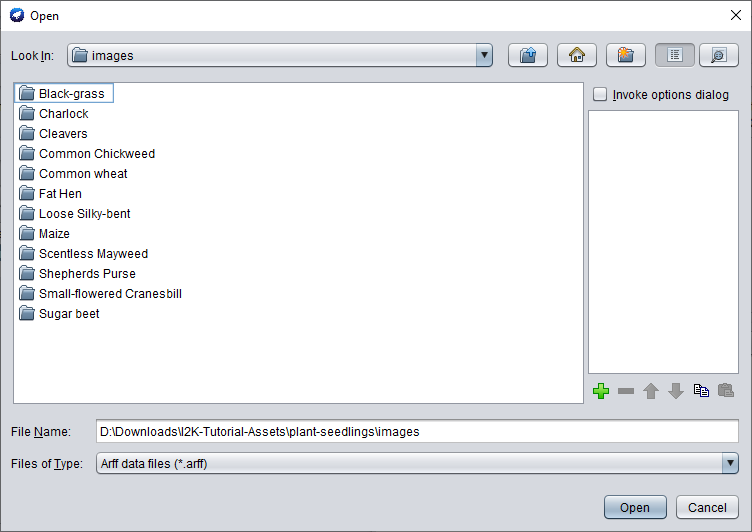 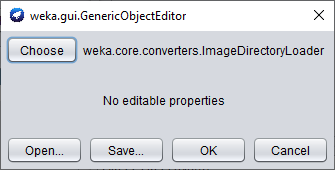 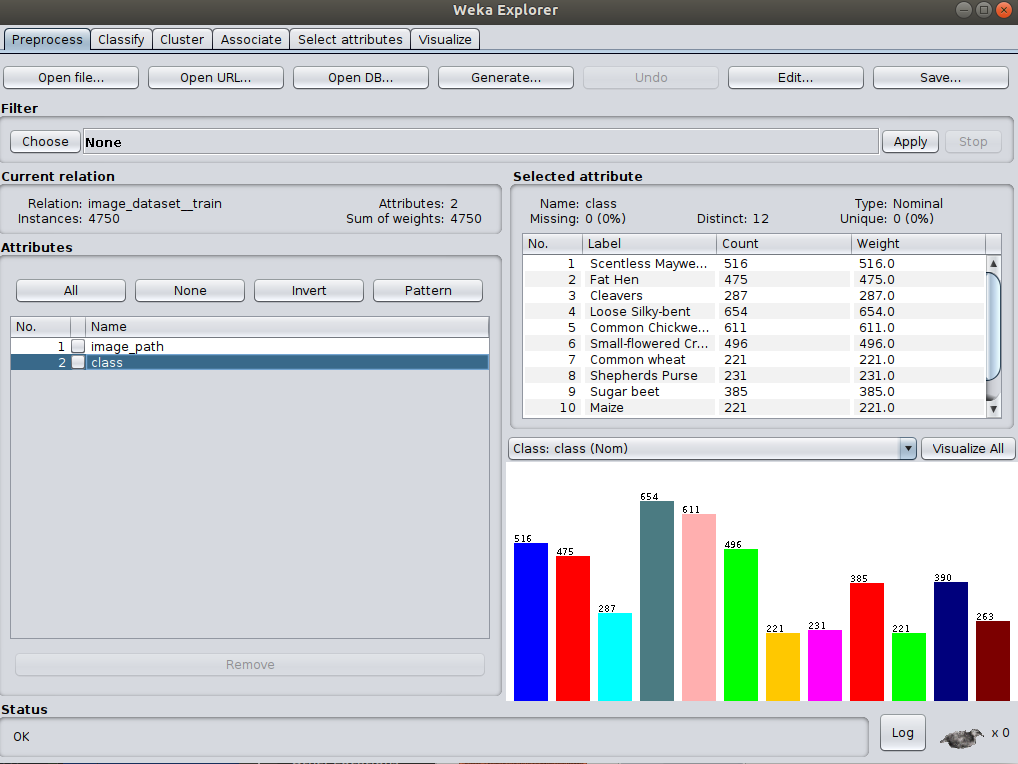 The ImageDirectoryLoader loads the dataset into the 'meta' format similar to the MNIST dataset we used above.

The tool can also be run from the command line

The associated meta .arff file has been created at the path specified and can be loaded into WEKA just as any other .arff file.

As we're simply checking accuracy within WEKA, we won't load in the test/ data and submit it to Kaggle - that is outside the scope of this tutorial.

Now that we've loaded our custom dataset, we can get back to setting up our model. 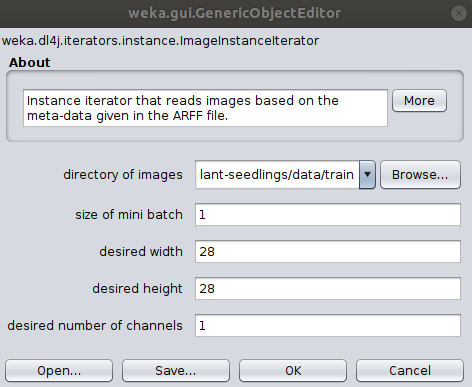 For the sake of this example, we'll use the tried-and-tested ResNet architecture. 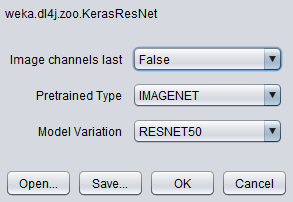 The above setup, trained for 20 epochs with a batch size of 16 produces a classification accuracy of 94.51% on the test data (your results may vary).

One difficulty with rapid prototyping in ML is that large datasets & models can increase your iteration time, slowing down development. Following are some useful techniques to avoid this:

Using the Resample filter, we can randomly take out instances from our dataset while roughly preserving the class balance (how many images are in each category). 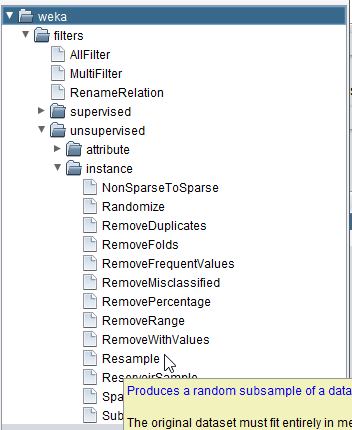 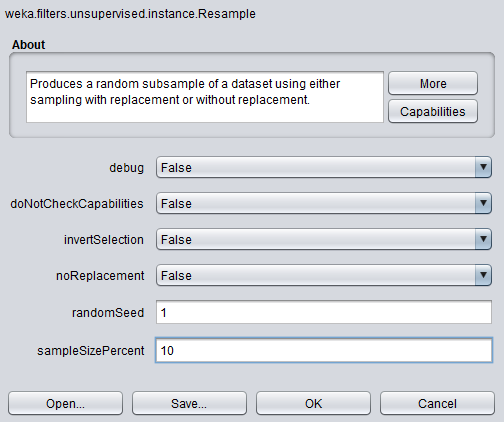 As we're getting to modern CNN architectures, their size becomes large and training takes a long time. We can reduce the training time during experimentation, and then easily scale it back up once we've decided on the configuration.

Even with the smaller dataset, training on CPU with such a sizable model (KerasResNet) can take a while (~20-30 minutes). Once you've got the model to begin training successfully, feel free to move on to the other sections of the tutorial if you find yourself waiting here for a long time.

We've introduced a few new features already, so now is the time to do some exploration of your own. Below are some suggestions for things to try out - try improve the accuracy over what we achieved with defaults.